The Dulaig was built in 1910, a gift from the Countess of Seafield to John Smith, her long serving Estate Manager.  Unfortunately John Smith died before the house was completed so it was his wife and family who first lived in the house.

We are very lucky to have the original “bills of quantity” and many other original papers for the house.  A copy of one of the original architect’s plans for the house is hung on the stairway and we even have the original 1911 order for garden plants. The cost of plants for the whole one and a half acre garden - including rail transport from over 20 miles away - cost less than a small pot plant does today!

The Dulaig was designed by Alexander Marshall Mackenzie – the well-respected Aberdeen-based architect who designed many famous buildings including:

The Dulaig was a very modern style of Edwardian house e.g. although stone built, the building was harled (rough-cast). People often remark on how modern-looking the style is, even today whereas most of the other older houses in Grantown-on-Spey are stone-faced Victorian.  With much simpler lines than the older Victorian houses, The Dulaig, had accommodation for 3 live-in servants and had partial central heating fed from the kitchen range.

The Dulaig is Good to Go! 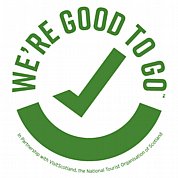 Having been closed due to Covid-19 restrictions from March until 31 July 2020 we are delighted that The Dulaig is "Good to Go" and ... Read More...